Psalm 61:2
From the end of the earth I called thee, when my heart is faint. Lead thou me to the rock that is higher than I. 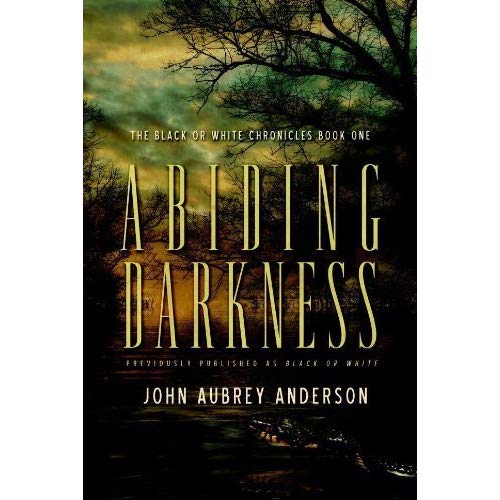 On the shores of Cat Lake, in the midst of the most defined era of segregation in American history, a spitfire seven-year-old white girl and spiritual eleven-year-old black boy live each day as best friends. Despite the idyllic scenery and their youthful innocence, forces of darkness trouble the girl and ultimately lead these children to make choices you will never forget. Author John Aubrey Anderson weaves a gripping tale of warmth, humor, and profound eternal truth.

The Abiding Darkness Chronicles are the kind of books that I keep going back to and re-reading. This was John Aubrey’s debut novel back in 2005.

When I first read this book about good vs. evil, and that this evil was hell-bent on destroying a child of seven and her friends. My first thought was what does evil have against innocent children, but we all know the answer to that question, evil does not discriminate.

This book was an emotional read for me, almost from beginning to end. So if you decide to read this, have tissues at hand😊. Because for reals, I was totally bawling at some parts😅.

Anderson has created a rich tapestry of the Southern literary tradition, he has set such a convincing mood and established an amazing background and in doing so has created a story that resonates with depth and meaning. This story moves at its pace, at life’s pace, and Anderson created this panoramic view of life, faith, and a friendship that exceeds both societal and racial boundaries. Go take a look at the lives of the Parker and Washington families.

This story takes place in Mississippi Cotton Country in the ’40s ’50s and ’60s. World War II is coming to an end. In this era of segregation, we meet Missy Parker, Bobby Parker, and Junior Washington (Missy’s best friend), they live on Cat Lake, and up until then, they were enjoying their childhood, as all children should be.

And so in the Summer of 1945, we witness a battle between angels and demons begins these children’s lives will hang in the balance, where promises will be made that will leave lasting impact on the lives of those involved beyond death.

The children are playing on Cat Lake bridge when an evil demon (fallen angel) decides he’s going to destroy them, by first killing Missy, thereby ensuring all those who love her will suffer endlessly. So when the Bainbridge family, who the demon has been controlling for years entered Cat Lake the demon decides to act on its hatred for mankind, especially those he deems happy, beautiful and loved.

Because these demons take over the minds and emotions of those they possessed, it’s also especially easy to take over the ones who already had evil in their hearts and minds. It was easy for them to create havoc in and around Cat Lake, all of it happening when Missy was around.

The being that remainded on the Cat Lake bridge had been working his vile mischief in the Bainbridges’ lives for years. His brief observation of Missy Parker, however, ignited a hatred that far exceeded anything he’d ever felt toward Estelle Bainbridge. He petitioned his leader, the high-ranking villain who was assigned to the Bainbridges, to let him stay at Cat Lake and work his evil on the girl and those around her.

Because Missy Parker is deemed “special” by dark and holy powers alike. Through her young life and through adulthood, Missy is unwittingly the center of a demonic and holy tug of war, as unseen, dark force wages war against her; first in an effort to sway her soul, and forever after in an effort to hurt her and the ones she loves.

The entire chronicle of black and white have stayed with me since the first time I read it. The characters were all so real to me, it’s like I’m running around in the dust and dirt with Missy Parker. There’s a lot of heartbreak here, long-lasting friendships that endured through death and so much more. There’s abiding love throughout these pages, it matters not if you’re black or white, it is of no consequence when love is at the center of all things.

I recommend this book to all, whether you are a Christian or not. It’s just a great read to get into.

The Black and White Chronicles