From the Epigraph of Demon Crown
I cannot persuade myself that a beneficent and omnipotent God would have designedly created the Ichneumonidae [parasitic wasps] with the express intention of their feeding within the living bodies of caterpillars….
– Charles Darwin, in letter written May 22, 1860, to botanist Asa Gray 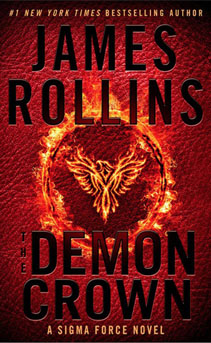 I couldn’t wait to read this latest installment of the Sigma Force series; I pre-ordered it to make sure I could start immediately upon its release. What? I was excited to read another sigma force book. Well, all I can say is it was worth the wait, the action-packed thriller had me finished reading it in a matter of days. I got my dose of DARPA and the Guild. James Rollins always makes me want more, and in Demon Crown, I got it, his infusion of history across multiple time-periods and the conspiracies that surround the Guild and other agencies are always so intriguing. His blending of history, technology, and science always makes the Sigma series a thrilling read.

This one is going to keep you guessing about the outcome of these beloved characters, right up to the end.

Alexander Graham Bell is in Genoa to secure the body of James Smithson; you know the guy who founded the Smithsonian Institution (yes, I love this about James Rollins, there’s always a bit of history within his books). Well, anyway Alexander didn’t exactly procure James Smithson’s body legally, but he needed to acquire them because of the secrets that he knows is buried with Smithson’s body.

He joined Bishop before the open tomb and peered inside. The wooden casket inside had long rotted away, leaving a blanket of heavy dust over what was clearly a set of bones. He reached reverently inside, parted the debris, and lifted the skull, which was surprisingly intact. He almost expect it to crumble as he gripped it.

In 1944, the secret artifacts that Alexander Graham Bell worked so hard to acquire and keep safe is stolen. Obviously, no secret is ever safe, especially if that secret has the potential to destroy. Hey, it’s what we humans live for after all.

Let’s move on to the present day shall, we? Commander Gray and Seichan are in Brazil on vacation (man I wish I were in Brazil right now, this winter is savage). So, there they are enjoying some sun and sand when they noticed a few planes coming towards them, then they released a black mist which began moving towards them. Well, at least they thought it was a black cloud until it got closer and they realized it was much more. What it was, is a swarm of wasps.

Wow! I enjoyed how James Rollins let us into the minds of the wasps (fascinating stuff) so that we knew how they operated, why they were doing what they did and how they would colonize and build their colony. OMG! The horror of how they (wasps) bring their children into the world. I won’t say any more about this here. But I will say that getting stung by these wasps multiple times will result in death if that is what they are going for at the time.

The man who has unleashed this ancient threat to the world is Takashi Ito, who has long wished to put Japan back on the top of the world, but his revenge is not only for Japan but for the death of his wife Miu who died in a gun battle. Man, talk about harboring a grudge. I mean dude, get over it, she was stealing some darn important artifacts from the U.S. what did you think was going to happen? She would steal it and then danced out of there. He also wants Gray and Seichan dead as part of his lunatic revenge.

With a biological assault now unleashed in Hawai for starters, Gray, Seichan, Painter, Monk, Kat and other agencies similar to DARPA, embark on a perilous journey to first find out how this weapon was released and how they can stop it, before the threat of unleashing to the rest of the world is carried out. The survival of mankind depends on them all.

As always you are going to learn a great deal when you’ve finished devouring this book. James Rollins always teaches you something new and fascinating.