Odd Thomas is a series (2003-2016) with one film being adapted from the amazing and brilliant Dean Koontz.

I have been reading Dean Koontz for as long as I have been reading Stephen King. Which is to say, I have read many books from both authors. This is a paranormal series that I have enjoyed immensely. Although, I would have preferred my heart not to be broken into so many pieces at the end of the series, Dean Koontz. Because throughout this series, I cried, I laughed, I was terrified, horrified, angry. I went through all those emotions and more. 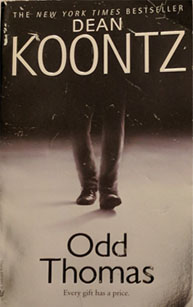 Odd Thomas is one of my favorite series from Dean Koontz. And yes his name is Odd. Odd is the hero of this book series and what a great hero he is. He saves countless lives by using his ability to discern when trouble is about to visit Pico Mundo, a small town in the Mohave Desert, where he lives as a short-order cook. Odd describes his days as being filled with “the potential for mystery, adventure, and terror”.

There are only a few people in Pico Mundo that know of Odd’s ability. The Sheriff, his girlfriend Stormy Llewellyn, his friends Little Ozzie, Terri Stambaugh and throughout the series we meet a few more.

Odd Thomas sees dead people, which I think is so awesome. With this ability, he knows who is going to commit an atrocious act and with the help of the sheriff stop the person(s). Now, this does not mean that he will be able to save every life, and in fact, he does not, which is hard for him to deal with.

I love that Elvis exists in a few of these books, the relationship between Odd and the ghost of Elvis is quite entertaining.

“The dead don’t talk. I don’t know why.” Odd does not seek out ghosts, but they do seek him out, they know that he will help them resolve whatever issue they may have that keeps them bound to this earthly plain.

Not only does Odd see ghosts who may or may not need help crossing over, but he also sees evil, malevolent spirits that feast on pain and whose presence always signifies imminent violence, such as massacres. Odd calls them bodachs, they are shadows in liquid form, ghouls that would horrify the most perverse of murderers, lucky for those who wallow in evil cannot see them.

“Having lost interest in me, the bodach crowded the new arrival and focused intently on him. if this inky entity’s head was in fact a head, then its head cocked left, cocked right, as though it were puzzling over the smiley man. If the snout-shaped portion was in fact a shout, then the shade sniffed with wolfish interest”.

In the beginning of this book, Odd sees a ghost, Penny Kallisto, a young girl of 12. She leads him to her disgusting killer, Harlo Landerson. I love the way Odd confronted him in his car. Can you imagine someone telling you what a horrible act you’ve committed when only you alone should know about it? Dang!

Odd doesn’t wait for the police but immediately chases him into a neighbor’s house, where the police soon grab him after a fight with Odd of course. Odd wanted to apprehend this murderer as soon as possible because he feared he was getting ready to perform his second murder (what a horrible child killing bastard).

This book will entertain you, and show you some of the deepest parts of the human existence, which is in part the nature of evil, fate, and enduring love.