And as [Jesus] stepped ashore, there met him a man from the city who was possessed by demons… Many times it had laid hold of him and he was bound with chains… but he would break the bonds asunder… And Jesus asked him, “what is your name?” And he answered, “Legion”. – Luke 8:27-30

Halloween is only a couple of days away. So I’ve thought I would do one more before the actual day of fun. The Exorcist is my review for those horror fans out there. This is a great read for Halloween and the movie is icing on the cake after reading the book. 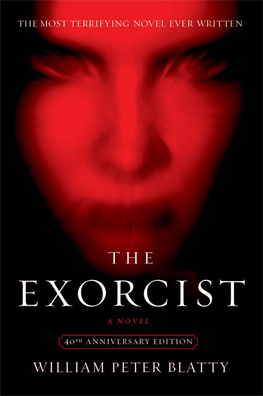 The Exorcist is a 1971 novel, inspired by a 1949 case of demonic possession and exorcism that Blatty says he heard about while a student in his class in 1950 at Georgetown University. “Crazy right?” Anyway, as we know this book is one of the most controversial novel ever written and it went on to become a literary phenomenon. “Luckily” 😀😀

I’m a huge fan of Good vs. Evil; Light vs. Dark, so books and movies with these elements tend to draw me in. The Exorcist takes you to church, to hell and back again.

The human will to live, our capacity to love, the strength in showing courage is everywhere within these pages, especially a mother’s love for her child.

This book does not shy away from detailing Regan’s fight with the demon, the profane language (which no mother should hear out of their child’s mouth) even through a demon. The sexual innuendos, all of this is depicted disturbingly vivid here.

The Exorcist is the story of an 11-year-old girl (Regan or Rags) possessed by an ancient demon, and the lengths those around her went to exorcized this demon, especially her mother (Chris MacNeil, an actress) and a Jesuit psychiatrist priest Father Damien Karras and Father Merrin who the demon already met.

The book begins with a prologue set in modern day Iraq, at the site of the ancient city of Nineveh. Father Merrin is at an excavation site when he feels a premonition of horror and saw signs that there is about to be an otherworldly confrontation. He sees a figurine of the demon Pazuzu entwined with a medal of St. Joseph.

In that same instance in another place we see Regan McNeil, happily chatting with her mother and then not long after she begins showing signs that something terrible is happening to her. At first, it seems it’s something that can be dealt with by doctors and science. But her mother soon realizes this is not the case and enlist the help of Father Damien Karras.

Following an onset of very obviously paranormal disturbances which psychiatric treatment did little to resolve her symptoms. The narrative then follows Karras’ attempts to diagnose the situation and at last, he obtains approval from the church to assist in an exorcism to be conducted by Father Lankester Merrin.

The two priests attempt to exorcize the Regan who is evidently possessed by a demon. The book follows Karras’s struggle with his own faith as well as his attempt to face the new dangers that the possession causes.

The Exorcist is also a TV series that was canceled by Fox but the  2 Seasons that was made is on Netflix. If you haven’t done so and you’re a fan of the book or movie, give it a go. The series attempt to delve further into demonic possession and the involvement of the church gets a new twist on their belief about demons.

I thought it wasn’t too bad at all. I enjoyed it.

The 1973 Movie the Exorcist